Now the latest chapter shows us a seriously injured Rin. After his war of words with Satan, he attacked him again. However, his physical body struggles to break through Satan’s barrier resulting in several wounds. It turns out that anything strange will be shot back and destroyed when it comes into contact with his fence. Even Beelzebub was injured trying. Rin understood that even though he had to push through, he could still sneak through the fence because it was made of Blue Fire. Lewin immediately devised a strategy to summon Vayu and let him attack Satan to give Yukio a chance.

Thanks to Rin and Vayu’s concerted efforts, they caught Satan off guard, and Yukio eventually fired the rocket. However, before we see it attack Satan, this Chapter is over. The missile was only an inch away from hitting him, so that’s our spoiler.

Some panels ended up documenting the fight in a stunning two-page format. Kato always gives us epic battles as she ramps up the intensity after each battle.

Kato gave an important hint about the mind of Satan. When Lewin summoned Vayu, he turned the battle in their favor, at least for now. Vayu’s power, combined with Rin’s massive two-page Satanic sword, hit Satan pretty hard. However, the surprise was that he had a short time with Yuri. Perhaps some emotional memories. 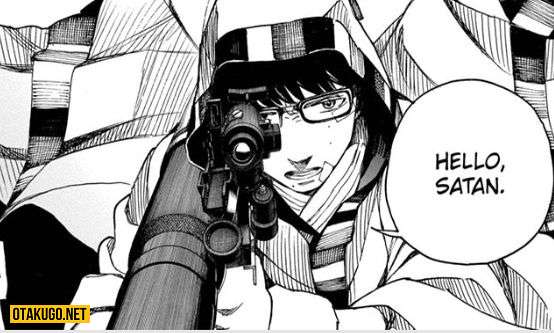 This gives us a big hint that there is more to Satan’s personality and what really happened between him and Yuri. However, the reason why he overcomes all affection and determination to become evil remains a mystery. Furthermore, he himself does not seem to be aware of the reasons for the flashbacks of his memories and why they are so important to him.

In the end, since Shiemi hasn’t joined the battle yet, it’s likely, this isn’t the end yet. Even though Yukio’s missile hit Satan, the fight will most likely continue. We finally got to see Lucy. Despite her severe injuries, she was able to continue fighting and even mocked the situation.

Thanks to Kato’s beautiful artwork, the battle depicted in the latest Chapter is nothing more than a masterpiece. We’ll wait for the next Chapter as we prepare for more twists. Manga is getting more interesting than ever!

The manga has had a bumpy ride and it doesn’t follow a fixed schedule. However, the past few chapters seem to be released on a monthly basis. According to Viz, Blue Exorcist Chap 137 will launch on December 3, 2022. So we have almost four weeks before the next chapter arrives.