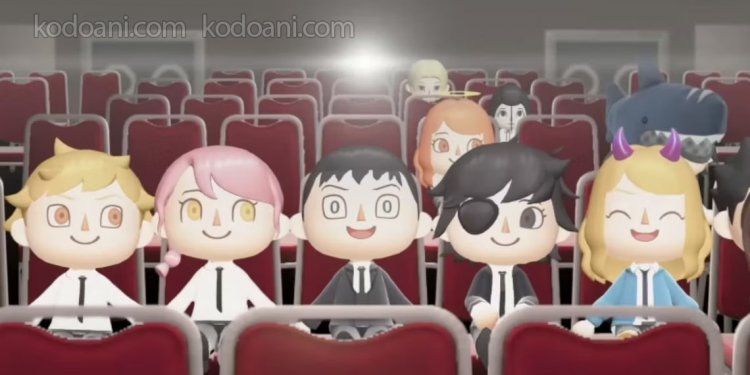 Created by イヨくんの【あつ森アイランド, the re-imagined prologue turns the characters into Animal Crossing redesigns with round faces and spheres for hands. Some scenes that were a bit sombre have been slightly revised, such as changing the original scene where Denji hugs Pochita in front of the corpse monument to a scene where Pochita is now a ball that Denji bounces. The office scene associated with Attack of the Killer Tomatoes changes to a different kind of office with posters by tanuki Tom Nook and Morning Musume’s single “Sōda! We’re Alive”. In this version, Denji transforms into Chainsaw Man by wearing a black mask and a beanie Chainsaw Man.

While much of the opening is light, one of the scenes is clearly more ominous. In the original, Denji kneels to follow Makima as she pulls his leash like a dog. In the Animal Crossing video, Makima appears to be pulling Denji against his will as he struggles. Previously, the creator has created many Animal Crossing remake videos for series like Spy x Family, Demon Slayer, Tokyo Revengers, and One Piece.

Developed by Nintendo and created by Katsuya Eguchi and Hisashi Nogami, Animal Crossing is a series of social simulation video games. The game allows the player to live in a village, performing various activities such as fishing, gathering and catching bugs, while living with their anthropomorphic animal neighbors. The 2020 release Animal Crossing: New Horizons received critical acclaim, selling over 40 million copies worldwide, most likely because many people stayed home during the first year of the COVID pandemic. The game dethroned Pokémon’s 26-year reign to become Japan’s best-selling game of all time.

Tatsuki Fujimoto first published Chainsaw Man on Weekly Shōnen Jump from December 2018 to 2020. The first installment of the dark fantasy series focuses on protagonist Denji, whose life changes when he transforms into the fearsome Devil Chainsaw Man. The second season revolves around and focuses on a new protagonist named Asa Mitaka, whose body becomes the host of a dangerous Demon known as the Demon of War, who wants nothing more than to defeat the Chainsaw Man. The manga has over 18 million copies in circulation as of October 2022 and has won several awards, including Best Manga at the Harvey Awards. An anime adaptation produced by MAPPA is currently airing, with the first episode receiving rave reviews for its dramatic atmosphere and voice acting.

Animal Crossing: New Horizons is only available on Nintendo Switch. Chainsaw Man airs on Crunchyroll and Hulu every Tuesday.