‘Following the bluff trend’, Le Bong suddenly appeared on the bulletin board of the Government Portal about aircraft safety violations

Hot TikToker Le Bong suddenly appeared on the bulletin board of the Government Portal about the trend of using phones to “hunt clouds”.

It is not unusual for passengers to take a few pictures while the plane is flying in the sky to check in. In particular, the passengers are celebrities, KOLs, hot girls… the more often this happens. Moreover, the scene from the plane looking out into the sky always has a very strong attraction, and is very popular with netizens. Virtual living behaviors such as hunting clouds, filming for many hours continuously are very dangerous violations of flight safety

Therefore, many people have always wanted to make the most of every opportunity, even taking advantage of the negligence of flight attendants to “hunt clouds”. One of the recent controversial acts is the fact that many celebrities have pressed their phones to the plane’s windows during the flight to “hunt clouds”. This trend originated from a foreign TikToker and has quickly spread to the whole world, including the Vietnamese online community. Not long ago, hot TikToker Le Bong was criticized a lot on social networks because she once pulled down the window cover to keep the phone from falling while “hunting clouds” while the plane was taking off. . Le Bong’s incident made both outsiders and flight attendants, who often use planes to travel, condemn. Because, this is a very serious violation of flight safety, indirectly affecting the safety of yourself and the whole flight. And recently, hot TikToker has a “chance” to appear again on social media. Specifically, the image of Le Bong when “hunting for clouds” was posted on the Government Portal Facebook page to illustrate the bulletin board about the problem of violation of flight safety of some netizens who like “virtual living” that is popping up in Vietnam. recently. Right below the post, many netizens expressed their displeasure with the current flight safety violations of a part of netizens. As for Le Bong, many opinions suggest a heavy punishment because she herself is a very famous and influential name on social networks, can create extremely viral trends and make many people catch up. imitate. Therefore, her transgressions will bring far more far-reaching effects than the average person. 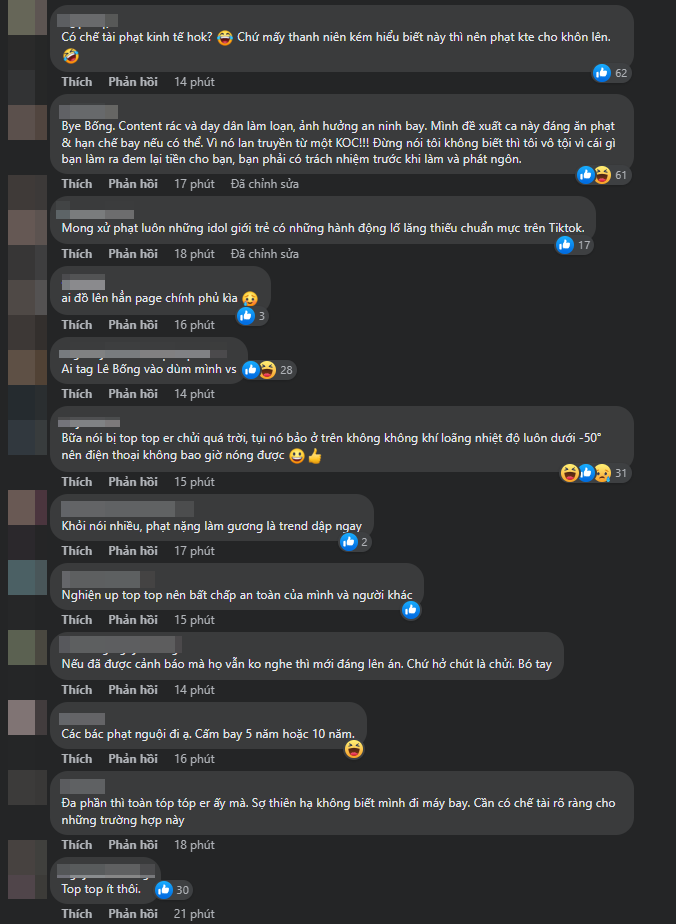 As for Le Bong, this is definitely another trouble in her career, which has also had many ups and downs. And the female TikToker herself must really fix it if she doesn’t want her reputation to be constantly affected because of her private life troubles.

See more: MC Minh Nghi shares the story of ‘pre-marital stress’, but it is worth noting this ‘muddy’ action