Genshin Impact: Any leaks about Update 3.3

Genshin Impact 3.3 launched in early December, but there have been a lot of leaks surrounding potential events and reruns. Kodoani.com – Version Genshin Impact 3.3 will be released in early December, meaning it’s only a matter of time before the community knows about what HoYovers has available for the next update. It has been confirmed that Wanderer (Scaramouche) and Faruzan will appear on the new limited banner of Genshin Impact 3.3. However, there is still a lot of speculation about the ability to rerun, among other things.

Although there is no official announcement yet, there are many leaks about Genshin Impact version 3.3, which gives players a pretty good idea of ​​what’s going to happen. That applies to characters that rerun with Wanderer, come with limited time events, etc. 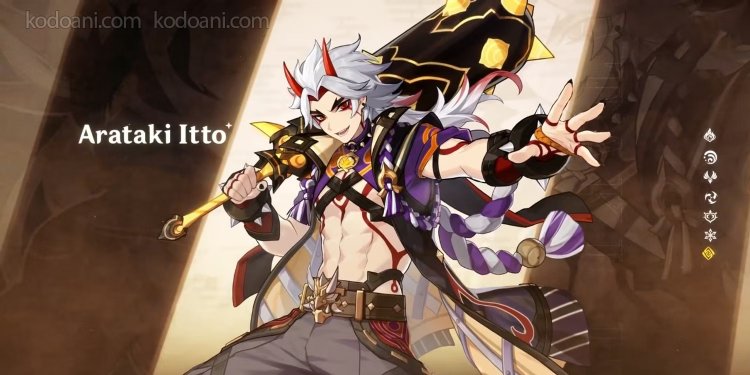 Perhaps the most common leaks are those around the limited banners of Genshin Impact 3.3. According to Uncle Lu, a reliable leaker, the first half of version 3.3 will belong to Wanderer and Arataki Itto. The DPS lava guy’s last rerun was just a few updates ago, in Genshin Impact 2.7. In this version, the guy participated in Chasm related quests along with Yelan and Xiao who also got the limited time banner, so maybe he will also appear in the new content of version 3.3.

For Phase 2 of update 3.3, Uncle Lu revealed that Raiden Shogun and Kamisato Ayato would be rerun, making Genshin Impact 3.3’s Wish Banner cycle a 5-Star referral program based on Inazuma. Genshin Impact’s Raiden Shogun remains one of the most popular characters due to her versatile role. Meanwhile, Ayato is a strong Hydro DPS that can fit into the recent array of bomb blasts. Although these are just leaks, they have been confirmed by SYP and Sagiri users, who are also trusted leakers in the community.

Another Genshin Impact Leak About Update 3.3 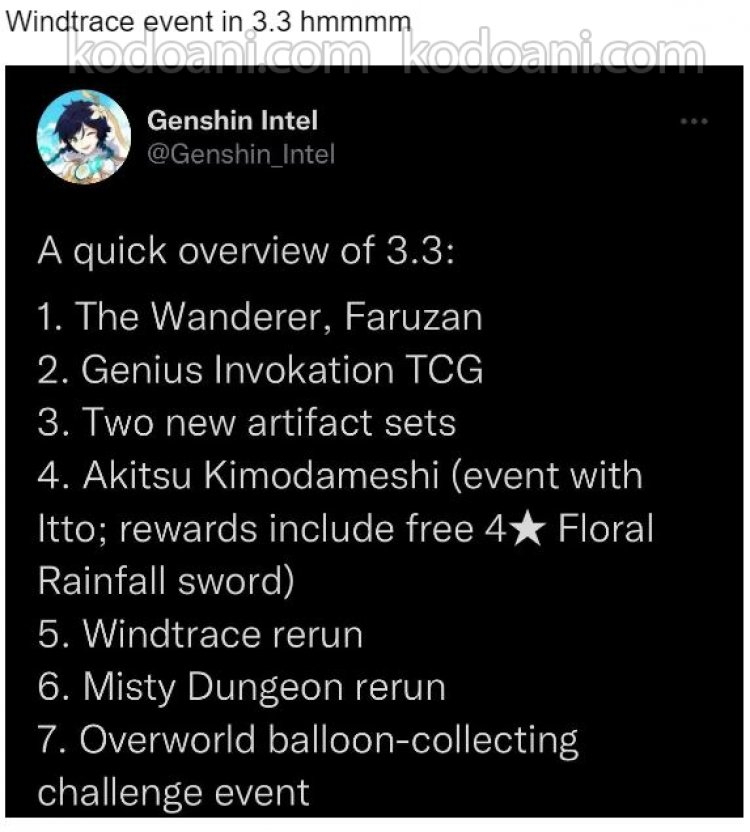 It’s no surprise that there have been leaks surrounding the content related to the upcoming mission of Genshin Impact 3.3. As noted earlier, it looks like a new limited-time event will take place, involving Arataki Itto, as well as Shikanoin Heizou. The event is called “Akitsu Kimodameshi,” with the latter term referring to a test of courage in the Japanese context. Information from a known leak suggests that the event will involve the capture of yokai or supernatural entities in Japanese folklore/Inazuman.

Meanwhile, user BLANK, another reputable leaker, shared that the 3.3 update will come with the Sumeru Alternate Quest and the Wanderer’s Story Quest, which explains the Raiden Shogun rerun. Leaks suggest that notable characters like the Genshin Impact Nahida, Dottore, and even Signora will appear in the Scaramouche story quest. Finally, there will be other miscellaneous events, such as the Windtrace event, the Misty Dungeon, and a world balloon collecting event.

Finally, the upcoming update will introduce new weapons and relics, certainly in the service of the Wanderer. The new Genshin Impact 3.3 weapons include the 5-star weapon “Alaya” for Anemo DPS characters and the 4-star sword “Kasabouzo”, which is said to be rewarded to players after completing the Itto event and Heizou.

All information here is derived from leker, so players should be careful with it. HoYoverse still has the final say when it comes to making changes to the game. Although if the leaks are true, it looks like Genshin Impact 3.3 will be a bit less severe than previous updates that focused solely on the Sumeru Demon Quest.