The spoilers will give us an early hint of what will happen next. Before that, however, let’s sum up everything Chap has shown us. The chapter begins by showing the aftermath of the fight between Hakari and Kashimo. We see a chibi Panda wandering around when we encounter Haraki’s severed hand.

With a bit of suspense, we see Kashimo plunge out of the sea after a steam explosion. However, just when he was about to consider himself a winner, Hakari emerged from the sea, punching him back into reality.

Kashimo finally surrendered. However, Hakari offers him a deal instead. They talked about how Kashimo saved his cursed technique to use on Sukuna since it was a one-time use technique. And all Kashimo wanted was to fight Sukuna. So, Kashimo agreed to side with Hakari in exchange for a duel with Sukuna.

Panda is quite shocked after receiving all this new information as this means Yuji will have to fight Kashimo. Hakari dismisses Panda’s concerns by casually asserting that Kouhai (Junior) must obey/respect his Senpai (Senior)’s wishes.

The cutscene where Charles was waiting for Hakari. This is also where the announcement is made about a new rule being added to the game. The rule is that any player can now give as many points as he wants to another player. They bicker about their fight hilariously until Nishimiya interrupts their joke.

Hakari and Nishimiya discuss the priority of rules they need to add to the Culling Game. However, Hakari was shocked when Nishimiya told him about how Maki was able to enter the colony at her will and her new powers. 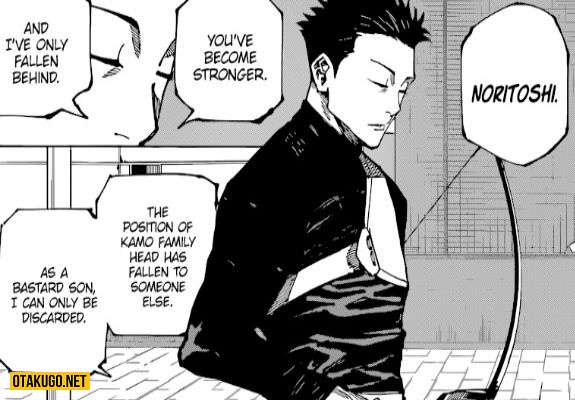 The setting shifts to Sakurajima Colony, where we see Maki and Noritoshi with brand new looks and equipment. On the other hand, we see Kogane introduce the Culling game with an Unknown Curse as it’s about to invade the colony. The chapter ends here without giving us more information.

However, Hakari still sacrifices her arm and establishes an impromptu binding oath to protect her body. Due to this, Hakari survived the explosion unscathed, only missing an arm.

Finally, the raw scans and revelations of Jujutsu Kaisen Chap 191 appeared. In the next Chapter, we will see Maki take action against a new cursed spirit that has some connection to her past. So let’s discuss.

Jujutsu Kaisen Chapter 191 will be released with the title “Sakurajima Colony 1.” Editor’s note on the first page: after the incident (Shibuya), at the Kamo family’s residence! A giant cursed spirit in the form of a caterpillar will target Maki and attack her with supersonic techniques. It will say, “ma- ma- hello, maki-chan!! did you know i also passed this side? “Naoya Zenin reincarnated as a curse. Noritoshi Jr will enter the chief’s room and meet Kenjaku, who apologizes to Shino, “he wandered 150 years in the past.” The Kamo family’s conservatives were mostly marines, and they were all within Kenjaku’s reach. And we will see more discussions between Noritoshi Jr., Kenjaku and Shino.

Here we end with a brief reveal of Jujutsu Kaisen Chap 191. Below we attach the raw scans of Chap. Another revelation is about Kashimo’s Cursed Technique. It turned out to be a one-time use technique. This means that it was probably achieved through a binding oath rather than by its very nature. Regardless, we can only wait to find out.

Furthermore, it is clear that Charles and Kashimo passed their points to Hakari. Whether Charles is attached to Hakari, however, is uncertain, considering their conversation. Also, it’s still unclear who added the new rule to the game. Yuta, perhaps? Now there are a total of 10 rules.

Another detail to watch out for is that, since Hakari promised Kashimo a duel with Sukuna, we’ll definitely see him fight against Yuji. However, Gege loves to throw a lot of twists and turns, so we could see Kashimo use his cursed technique in a different situation.

Jujutsu Kaisen Chap 191 will premiere on July 17, 2022, according to Viz Media. This means we don’t have any time off next week. We won’t have to wait longer than necessary to see Maki and Kamo in action. With many of the characters back in action, the Culling game becomes a lot more fun and exciting to look forward to.