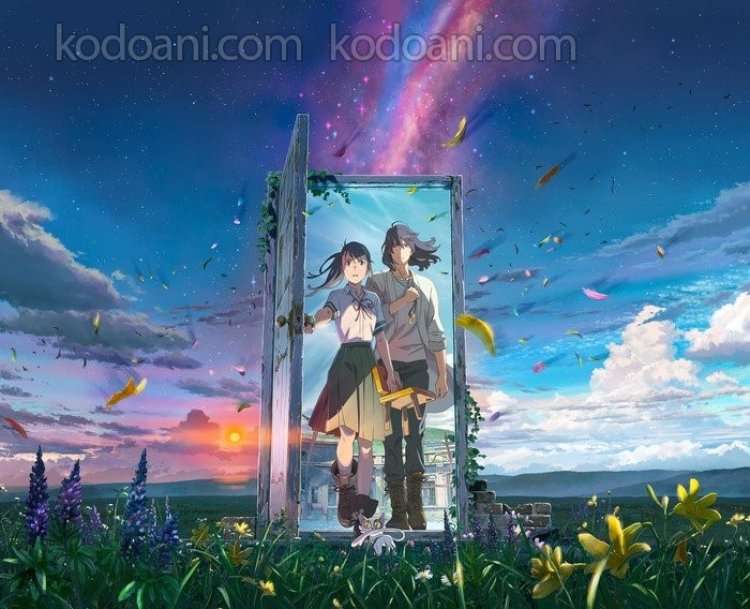 The film opened in Japan last Friday and topped the box office charts.

On the other side of the door, time was up—

Suzume, a 17-year-old girl living in a quiet town in Kyushu, encounters a traveling young man telling her “I’m looking for a door”. She followed him and discovered a weathered door in the mountain ruins, as if it were the only thing left after the collapse. As if drawn by something, Suzume reached for the door… Before long, doors began to open one after another in various parts of Japan. When disaster comes from the far side of the doors, the open doors must be closed. The stars, the setting sun, and the morning sky — where she lost her way, there was a sky that seemed to be at peace. intertwined. Guided by mysterious doors, Suzume’s “door-locking journey” begins.

Shinkai says that the three key points about the film are that it is a detour around Japan, a story about “closed doors” rather than opening them, and a reason to go to the cinema. Shinkai further explains that a closure can refer to tying loose ends or completing something.

Actress Nanoka Hara voices the female lead Suzume Iwato in the film. Hara competed for the role with over 1,700 other applicants during the auditions and this is her first voice acting role in the anime. Idol group SixTONES member Hokuto Matsumura (live-action Liar × Liar movie Tōru, live-action xxxHOLiC movie Shizuka Doumeki) will be making the first voice acting role in the film as Sōta Munakata, a young man who embarks on a journey. with Suzume as “The Master of Closing the Door.”

Shinkai (Your Name, Weathering With You) is directing the film and writing the screenplay. He is also credited with the original story. Masayoshi Tanaka is designing the characters. Kenichi is the animation director. Takumi Tanji is the art director. CoMix Wave Films and Story Inc. are producing the movie. TOHO is distributing the film.

Các tác phẩm khác của Shinkai bao gồm 5 Centimeters Per Second, Voices of a Distant Star, She and Her Cat, The Place Promised in Our Early Days, The Garden of Words, và Children Who Chase Lost Voices.

The film will open in Japan on November 11, Shinkai has also penned a novelization of the film that will be released on August 24.