The plot shifts the focus to Bakugo’s development and his new move. So let’s quickly sum up what we know so far. Shigaraki then went on to tell them his idea of ​​a world where everyone was united as the “exploited class”. “However, Bakugo cuts him off with taunt and prepares to unleash his new move with the help of a new enhancement to his armor.

Bakugo finally admits how grateful he is to receive everyone’s love and support. It was thanks to it that he became a hero and a better person. We also see his memory of Midoriya show up on the console when he is captured by the seaweed monster at the beginning of the manga.

With all these thoughts in mind, he unleashed Howitzer Impact: Cluster. But before we see its impact, Chap ends here, leaving us with excitement and anticipation. The reveal part of My Hero Academia Chap 359 has not appeared yet. We will update this article as they do. We usually update bug fixes by Thursday at the latest, but since next week is a break, it may take longer. Therefore, pay attention to this article.

With the flow of recent chapters, Horikoshi seems to bring all the battles to an end at a pivotal point. The latest chapter switched to the floating ward instead of Midoriya. This means that entering the battle of Midoriya will be epic and at a very important time.

With Bakugo’s new powerful attack, Shigaraki will surely take a lot of damage. On the other hand, AFO and Dabi’s bodies were also charred. So now, if we look at the fan theory regarding Eri’s bullet, it makes even more sense. 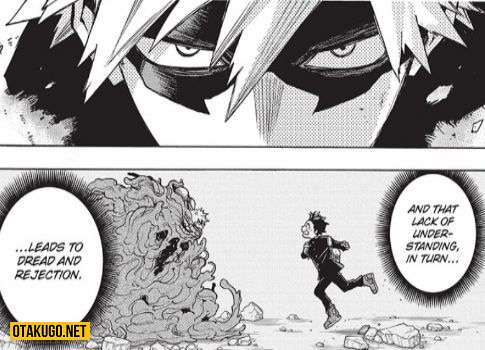 It seems the AFO’s final move, a backup plan, will be triggered when the bodies of all three are nearly destroyed to ashes. If this is indeed the case, then AFO’s plans and instincts are frighteningly correct.

However, we can only wait and see which path Horikoshi decides to take. The next chapter will be an interesting one again.

Theo Viz Media, My Hero Academia Chap 359 will premiere on July 18, 2022. This means the manga will go on hiatus next week. We’ll have to wait a little longer than usual to determine how the plot will progress after Bakugo’s development.