My Hero Academia Chapter 359 arrived this Sunday after taking a break and continuing the events from the previous Chapter. This chapter has a nice story, as Bakugo shows us his new move. We all expect this new move by Bakugo to have a huge impact on Shigaraki. However, it does nothing more than leave a scratch. Furthermore, Shigaraki even insulted our hero. To save him, our three UA adults are here. Let’s talk in detail about My Hero Academia Chapter 360.

The title of My Hero Academy Chapter 359 is “Our School” and the events from the last Chapters continue in My Hero Academy Chapter 359, where Bakugo is launching his new attack. . UA management course students also participated in the event with video cameras and documentary commentary. Students from the management course are filming documentaries so they can bring heroes closer to society through film. Bakugo’s new attacks landed on Shigaraki, and it created a huge explosion that made everyone nervous. 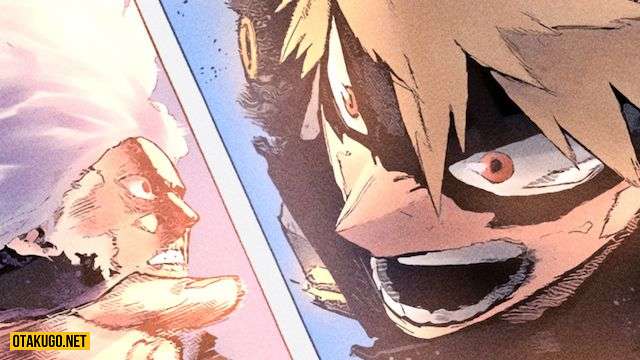 As the dust fades, it is seen that Shigaraki stopped his attack with his right hand, leaving a light wound on the right side, and Bakugo wounded on the right side as well. Shigaraki approaches Bakugo with murderous intent. The three adults of UA are tasked with stopping Shigaraki until Midoriya arrives.

We can’t wait to see the events from the Last Chapter continue in My Hero Academia Chap 360. We learned from My Hero Academy Chapter 359 that Bakugo’s new attack didn’t have any major impact on Shigaraki and that he was on his way to kill Bakugo. This chapter also shows us Shigaraki’s psychological depth on how he focuses on his goals. Apart from Midoriya, everything else was of no interest to him. Bakugo had realized the difference in their strength, and now that he lay still, the top three of UA were here to save him. We can expect their involvement in stopping Shigaraki until Midoriya arrives. I believe if My Hero Academia Chap 360 focuses on their fight, then we can expect Midoriya to arrive at the end of the Chap. People on the internet are saying that the “Big Three” are food for Shigaraki to play with. Let’s hope that’s not the case, and we see some action from three adults, or at least, Lemillion. In the meantime, we can also look forward to seeing All for One and swinging his sleeves regarding the quirky bullet and Eri.