The first mobile phone was born in 1974, the first smartphone was released in 1994, while this picture was painted in 1860.

Art lovers couldn’t help but be confused after discovering that a painting by the late famous Austrian academician – Ferdinand Georg Waldmüller – appeared to show something that looked like a smart phone. The painting “The Expected One” was painted in 1860, a time when modern technology was still something of a mystery and far away.

In the picture, the main character is a woman walking on a dirt road in the middle of a romantic natural landscape, though still glued to something shaped like a smartphone. bright. In the distance is a man hiding behind a bush, holding a rose in his hand, seemingly preparing to give it to a woman. 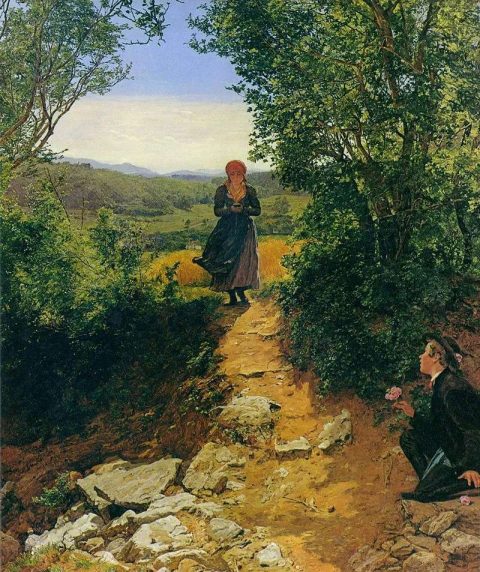 The painting is currently housed in a museum in Munich, the Neue Pinakothek, in the hall where works dating from the 18th and 19th centuries are displayed.

Many people, after visiting and seeing the painting, confirmed that the woman was “surfing” the smartphone screen while walking. Even at that time, the technology didn’t even exist.

That is also why many people joke that the woman in the picture is a “time traveler”. Even because the name of the work is translated as “What to expect”, the author is suspected of having the ability to predict the future.

Facing this heated discussion, art critics have denied it and offered a simpler and more reasonable explanation: the woman seems to be holding a book and walking while praying. wish. Some people even photoshopped the light emitted from the “phone” to prove their conjecture.

Obviously, just through one picture it is possible to see how amazing the change in human society is. If this painting were interpreted by people living in the 18th and 19th centuries, they would certainly not hesitate to confirm that what the woman is holding in her hand is a hymn book or a prayer book. But when through the eyes of a modern person living in the middle of the 21st century, the book is immediately seen as a smartphone – which has been and is becoming an inseparable object of anyone.

“Today, no one can’t imagine the image of a teenage girl staring at social media on her smartphone.” One netizen commented.

It is known that this is not the first time modern technology is said to appear in a painting that is centuries old.

Apple’s boss, Tim Cook, once announced after a museum tour in Amsterdam that he discovered an Iphone in the painting that is 350 years old. The man in the picture is said by Tim Cook to be holding an Iphone.

As can be seen, the painting depicts a man holding a rectangular object in his hand. Next to it is a woman and a dog who are also looking at that “object”.

“I’ve always thought I knew when the iPhone was invented, but now I’m not so sure.” Tim Cook said during a conference after a tour of the museum.

See more: Signing up for a massage package of 400 thousand, the woman reacted when the last bill was up to 950 million