In recent days, the Vietnamese gaming community is getting more and more excited with the information that the famous actor Hua Vi Van will become the representative of the Three Kingdoms of 2022 – a game with many classic features of the series. tactic.

And until now on May 12, the community of gamers passionate about tactics exploded when the Three Kingdoms of 2022 was officially released to the fan community: 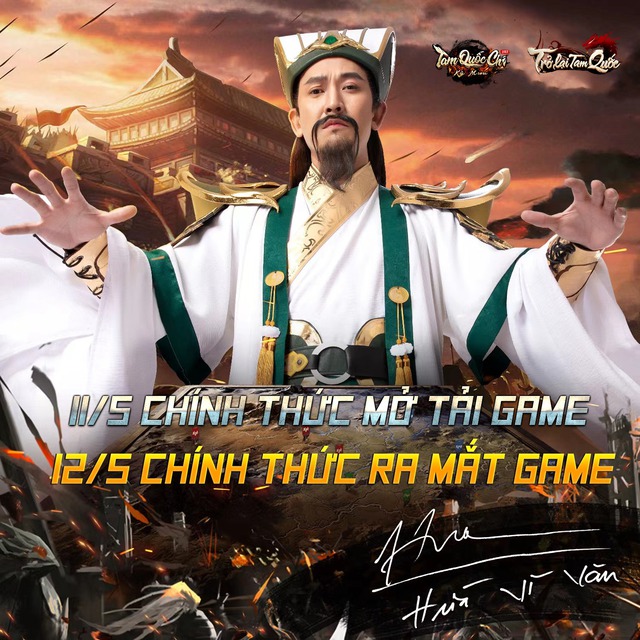 Three Kingdoms 2022 will bring a familiar context, combined with role-playing and tactical elements, accompanied by a typical plowing gameplay. Accordingly, players will be on the journey from a talented general to enter the world of the Three Kingdoms and gradually climb to the highest position – the monarch has the right to summon the world.

Players will be led, giving the way to each job of a city owner such as recruiting troops, recruiting talents, building roads, and hoarding food. When he was strong enough, he could send his army to attack the city to seize land to enrich his territory, like a hegemon in the Three Kingdoms period.

The beauty of Three Kingdoms 2022 is that it describes these stages intuitively and vividly. Make the player feel like a real role-player when having difficulty in the stages of recruiting sages, being constantly harassed by other vassals. At this time, the decisiveness and strategy of each player will be challenged to a high degree to be able to survive and develop. 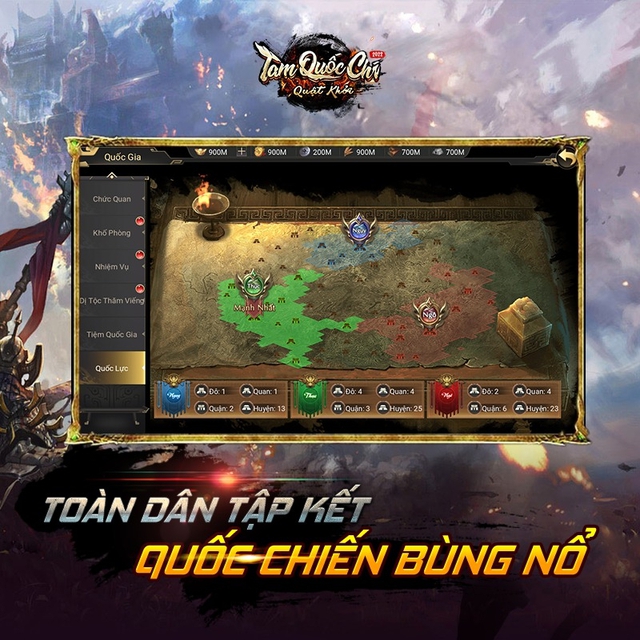 Not only was the domestic successful, but players were also challenged many times when they had to lead troops into battle. The never-ending conquests and conquests among the vassals are the opportunity to rise above and achieve great karma, or sink and become a stepping stone for other people’s business!!!

From choosing an army to counter, a general who is good at fighting or carving the enemy, to calling for help from the surrounding Alliances. Each step of the player will be like a chess piece placed in the chaotic situation of the Three Kingdoms, and only those who raise the flag with smart moves can “quench the chaos” and win the final victory. 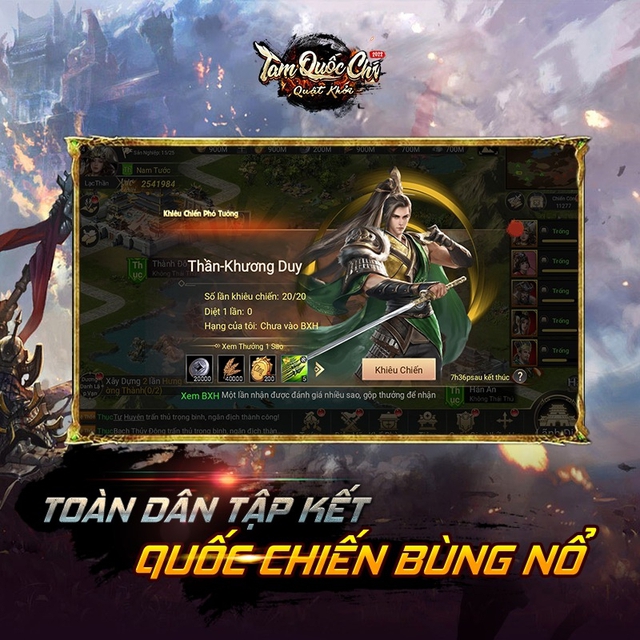 To celebrate the game’s launch today, the publisher has posted and organized a series of attractive events on the fanpage of this game in parallel with attractive ingame events: 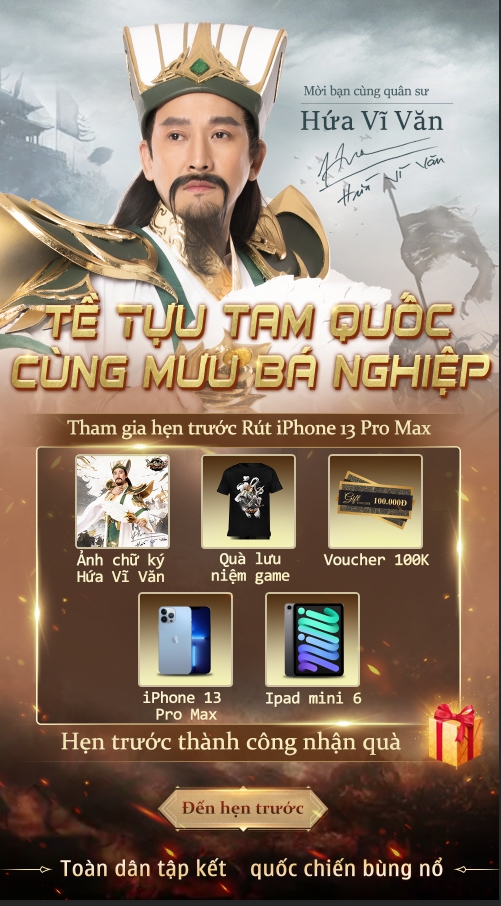 First, the event to reserve seats in the world of Three Kingdoms 2022 has resulted when 200,000 owners have successfully broken the set level of NPH. And thereby bringing the highest reward to all pre-registered owners: 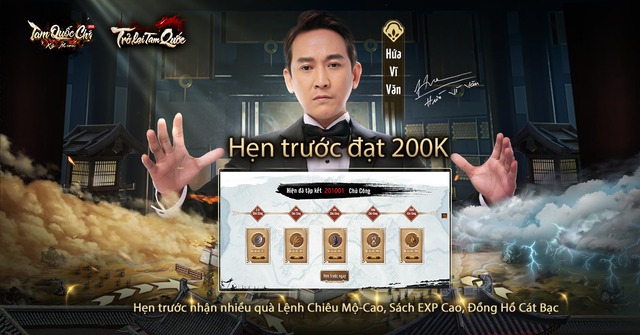 These gifts will create a solid foundation for players to have the best start in their journey to conquer the Three Kingdoms of 2022.

Second, people should not ignore the attractive benefits in the early days of opening the game. From logging in to receive free generals every day to the first or continuous top-up, make a wish every day…. Both bring generous rewards to players in the game. Indeed, looking at the incentives that the publisher offers to gamers of Three Kingdoms in 2022, many other game players must also be hungry.

And finally, let’s take a look at some of the exciting events that were jubilantly held on the fanpage: 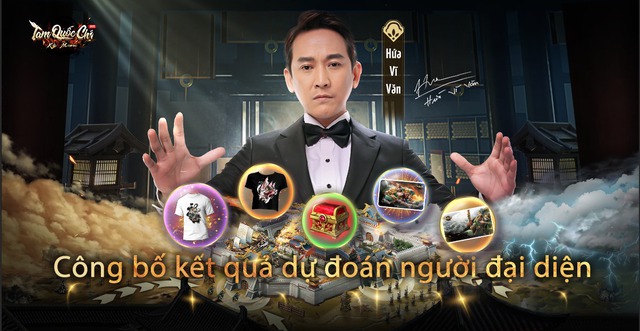 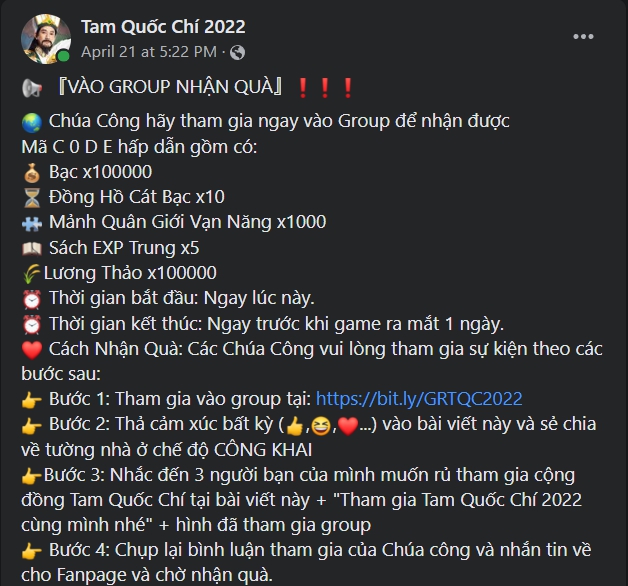 Specifically, in the past time, just participating in activities on the fanpage and in the official group of Tam Quoc Chi 2022, players will have the opportunity to receive extremely valuable gifts.

The publisher of MocGame is too lenient with the players, knowing that in the process of waiting for the game, many gamers will be extremely impatient. And these events will partly help players relax until today to plunge into the game.