Tokyo Revengers Chap 262 also shows Sanzu eventually facing off against Mikey, whom he’s labeled the King multiple times in the series. Their dangerous confrontation will unfold in the upcoming issue and will likely continue to develop in the chapters to come. 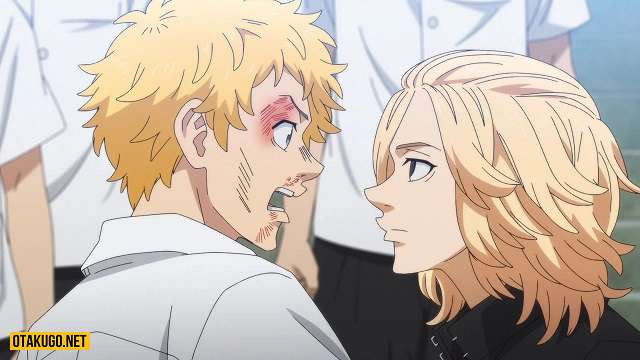 As mentioned above, the raw scan of Tokyo Revengers Chap 262 started going live earlier today, setting Twitter on fire with excitement. Fans are super ecstatic with the current raw leaks, with the Mikey and Takemichi confrontation capturing their imaginations.

Raw scan for Tokyo Revengers Chap 262 begins with Chifuyu Matsuno, the deputy leader of Takemichi’s Tokyo Manji gang, giving a speech aimed at the captains. Chifuyu’s words are mostly supportive of Takemichi’s confrontation with Mikey, as the Captains seem to be cheering for him as well.

Hakkai and Taiju can also be seen, the one in front carrying the latter, who appears to be heavily wounded from the fight so far. In addition, Taiju carried the Tokyo Revergers flag, which was also flown by the Tokyo Manji gang.

Subsequent shots seem to show Mikey and Takemichi finally clashing, with the former completely covering the latter after a quick stare. Although this is not their first fight, the approach of the previous ones seems different. Here, he seems to be treating Takemichi as an annoyance that needs to be erased.

This could be because Mikey is looking for Sanzu, who appears to be sitting in his chair in another panel. More. it shows Shuji Hanma’s glittering past, with fans suspecting he’s looking at Sanzu instead.

If the raw scans are interpreted correctly, it seems that Mikey is seeing Takemichi as a hindrance or annoyance rather than an equal. He once again refuses to enter into a discussion with his old friend, choosing to outdo him and achieve his true goal.

This is further reinforced by additional raw scans showing Mikey and Sanzu going head-to-head. Although the latter appears to be severely wounded, Mikey’s intent to confront him doesn’t seem to wane in the slightest.