Tokyo Revengers Season 2 has also been announced in 2023, are you excited for the return of the anime? 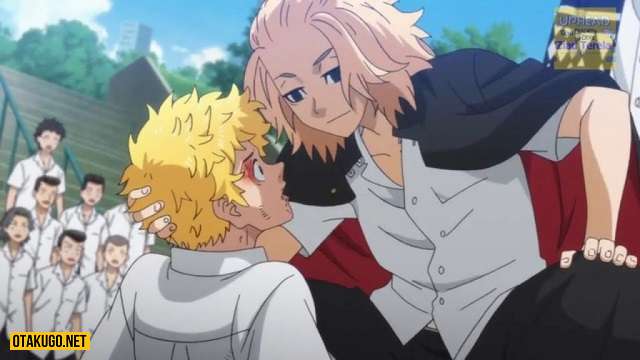 We all know that Keisuke and Chifuyu had a very deep relationship. To tell their story, a new spin-off is coming. Written by Yoshinori Kawaguchi, it will be overseen by Wakui himself.

It will be named Baji Keisuke Kara no Tegami, which means Letter from Baji Keisuke. We look forward to that.

Last week, the latest episode of Tokyo Revergers sold a lot. It is in the top 10 best-selling manga of the week, with more than 118 thousand sales. We expect strong numbers to continue into the coming week.

Will the truth about Takechi’s time jump be known to the public? In this chapter, both he and Sanzu openly talk about the future and Taiju heard it clearly.

As now, many people don’t know about it. And people should be unaware of such a phenomenon.

Once again, Hanma became a thorn in the way. We hoped that Taiju would be able to handle him, but things went in a different direction. In Tokyo Revengers 262Takemichi and Chifuyu will confront Hanma and Sanzu.

When a bike hits you, people expect you to stay. But Sanzu got up! He’s so resilient! Maybe that’s why he’s the vice-captain of the Kanto Manji Gang.

How far can his wounded self stand against Takemichi? Tokyo Revengers Chap 262 will speak.

What is Takemichi doing?

In the final installment, Takemichi succeeds in his quest and is transported to the future contentedly. So Mikey is curious about his return. And with no punches, Takemichi reveals the whole reason.

He told how Mikey fell on the dark side.

He told how Mikey tried to kill him and then tried to commit suicide. But in the end, Mikey wants Takemichi’s help. And it was holding his hand, which triggered this final jump.

Hearing this, Mikey was clearly shaking. We’ll see how he reacts in Tokyo Revengers 262.

What is Sanzu doing?

As a contemporaries, Sanzu chose to look at his own weaknesses. He asserts that Mikey’s fate is in the hands of evil. He insists that Mikey must walk the path of destruction and therefore, he will not allow Takemichi to save the boss.

His attack from behind knocks Taiju off. In Tokyo Revengers Chap 262we’ll see him face off against the hero one last time.

Except this time, he had the help of the evil Hanma.

Seeing Takemichi alone, Chifuyu jumped in. Although very weak, he will support our protagonist until the end. Previously, he blamed Draken’s death on Takemichi.

But that time is over. Now, he chooses to support the same man.

While he is instantly knocked down by Hanma, we can see the fire in Chifuyu burning like never before. In Tokyo Revengers 262he will do his best to protect Takemichi in this fight.

While the truth has been told, we’re not sure how far these two can go.

We are looking forward to the destructive parts of Tokyo Revengers Manga 262 very soon. As of now, not many Chap spoilers have been released. But fear not, we are constantly looking for any impending leaks. We keep an eye on multiple sources.

We expect some leaks to be released on July 17, 2022. Once they are released, we will be able to provide you with confirmed leaks. In this section, we will bring them up. So please be a little patient and wait for us.