Rushing to continue playing before it was his turn, the 7-year-old boy was broken his finger by a robot opponent during a match within the framework of the Moscow Chess Open chess tournament in Russia.

According to RT, on July 21 (local time), at a chess tournament in Russia, a rare incident happened, when a chess playing robot broke the finger of a 7-year-old boy, and now His family is planning to sue the producer. 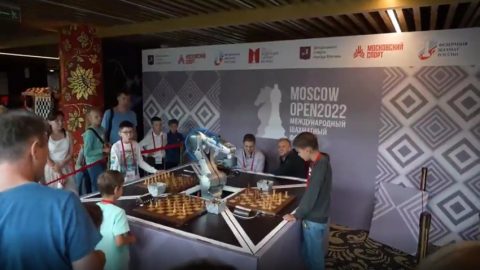 Specifically, the incident occurred at the “Moscow Open” chess tournament, a security video showed, the robotic arm of the robot grabbed the boy’s finger, before others ran to remove it. “The fact that the boy broke his finger is a bad thing,” said Sergey Lazarev, president of the Moscow Chess Federation. According to Mr. Lazarev, the Federation does not own the robot, but leases it from a sponsor.

As for the 7-year-old boy, it seems that the injury is not too serious when he can still compete after being cast. After the tournament, he also received a special prize and some souvenirs.

According to information from this robot manufacturer, this is an extremely rare and rare incident, because this robot has been operating for 15 years without any problems. According to the manufacturer, the 7-year-old boy “violated safety protocol” when trying to make a move during the robot’s turn, but they will check to make sure this does not happen again.

Currently, the boy’s parents are contacting the Moscow prosecutor’s office to ask for a compensation. But the Chess Federation said it will try to settle things in the most satisfactory way between the parties.

See also: Asking for help from the police because his wife threw the black fund into the landfill