Bill Gates currently owns a fortune of more than 100 billion USD and is very hard working for charity.

According to the Bloomberg Billionaires Index, currently Billionaire Bill Gates has a fortune of 113.7 billion USD. Bill Gates is one of the most philanthropic billionaires in the world. He also opened a lot of charities to help those in need. Recently, Bill Gates revealed that the Bill & Melinda Gates Foundation is promoting charitable activities and he will donate 20 billion USD to support. The richest billionaire in the world’s top 10 said: “I hope, by giving more, we can help people reduce the difficulties they are facing and help the fund realize its vision of giving everyone the opportunity to lead healthy and productive lives.”

He added: “In the future, I plan to give almost all of the money I have to charity. I will gradually leave the list of the richest billionaires in the world.” Image of Bill Gates in a charity event (Image: Internet)

The Bill Gates family charity fund always sets goals to achieve, the latest goal is that the fund will disburse $9 billion per year and will be completed within the next four years. The amount that Bill Gates plans to donate here is more than double the current goal. This donation has brought the fund’s total assets to $ 70 billion according to a latest announcement. Last year, when Bill Gates and his ex-wife Melinda divorced, surprising public opinion, then both pledged that they would spend $ 15 billion to support this charity. “Since that time, the two co-chairs have made significant contributions to deliver on that commitment,” said Kate Davidson, a spokeswoman for the Gates Foundations. 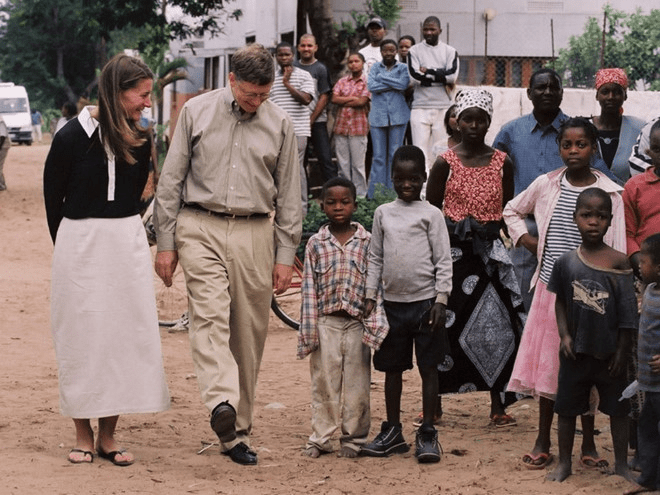 Bill Gates and his ex-wife work hard to do charity together (Photo: Internet)

The Gates Foundation is a well-known and very powerful organization in the nonprofit world, employing 1800 people and spending nearly $80 billion over the past 20 years. Previously on the board of the organization were only Bill Gates’ father (who passed away in 2020) and Warren Buffett, of which Warren contributed up to $35 billion to the foundation. After Bill and Melinda divorced, Waren resigned and the foundation also had a change of board of directors. The Gates Foundation has expanded its board of directors to four members including: CEO, Zimbabwean billionaire, non-profit consultant and baron.

Currently, Ms. Melinda is still active in the organization and has no plans to leave after “separating” with her ex-husband. “Bill and Melinda remain committed to continuing to work together to advance the fund’s goals and policies,” said Davidson. In addition, Ms. Melinda also has a charitable foundation of her own, called Povital Ventures.

See more: The boy made a 700kg steel statue for his father