A series of supercars worth a total of £3.3 million (~ VND 92 billion) have been ticketed for illegal parking outside a 5-star hotel in London.

At the beginning of this July, The May Fair hotel in London became the focus of attention when at least six expensive cars parked in front of the hotel received tickets from traffic police. The paparazzi captured a photo of a man collecting all the tickets, then heading back to the hotel. The series of supercars attracts a long line of pedestrians lining up to take photos. It is estimated that the total value of the series of vehicles must be up to £ 3.3 million (~ VND 92 billion) and all are owned by a single owner.

Impressive fleet of cars, including the world’s fastest car brand Bugatti and super luxury car icons from Italy like Ferrari and Lamborghini. The most expensive car in the collection, the £2.4 million blue Bugatti Chiron (~ VND 67 billion), can reach a top speed of 304 km/h. There’s also a £150,000 Lamborghini Murcielago and a bright yellow Ferrari F355, listed for up to £180,000 on Autotrader. 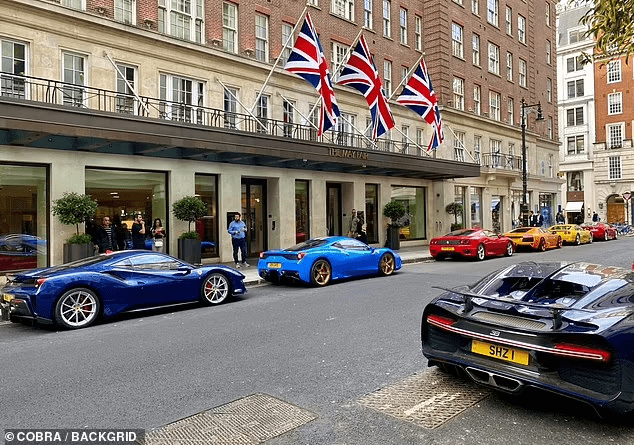 As the owner of one of 300 limited Bugatti Chirons, netizens predict that the billionaire will not be too worried about the £130 parking fine (4.2 million VND). According to local media, car owners will have to pay a flat fee of £130 if parking on a single or double yellow line. However, the fine can be halved if the fined person timely pays the money within 2 weeks. The five-star May Fair hotel is located in one of London’s most expensive boroughs, just a short walk from Buckingham Palace and costs an average of around £450 a night. Rent for the most luxurious penthouses at the hotel can be up to £3,000/night. The May Fair is a regular gathering place of billionaires and millionaires. It is easy to see a long line of million-pound supercars appearing here.

See more: Penguins ‘on hunger strike’ after aquarium changed to cheap food due to price storms