The pinnacle of storytelling and construction is seen in the first Chapter of Chainsaw Man Manga Part 2. Asa Mikata, a high school student will now be the next threat to Denji. But the hero is not aware of the possible threat to her. So here’s everything there is to know about the next chapter, Chainsaw Man Chap 99. In the upcoming spinoff, Denji’s arc will return to the limelight. The last time we saw him, dark rumors about his intentions were circulating around the world. But for now, Asa Mikata will be his focus.

The second part of the Chainsaw Man manga begins with the birth of an outcast in the class, Asa Mitaka. One fine day, the teacher brought a Devil Chicken named Bucky into the class. She told the students that they would have to eat the creature for the next three months. But until then, animals live and thrive around them. As the days passed, everyone seemed to become friends with the pet except for Mitaka. 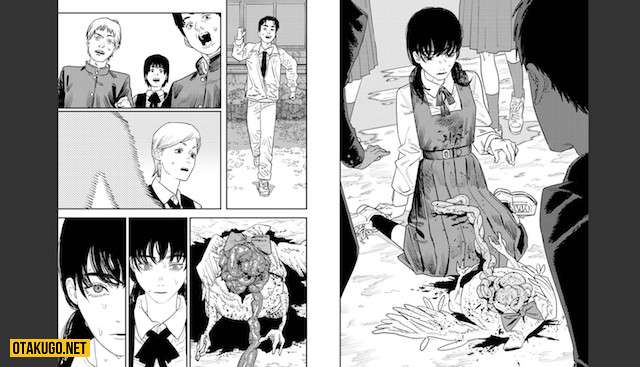 She would never take classes or have lunch with them. One day, Mr. Tanaka comes to Mitaka to tell her that Bucky will never be killed and that he is just trying to teach a lesson to the class. And so Mitaka also started taking classes in the games they played with Bucky. And this is the horrifying moment when the girl tripped over the pet and ended up killing it.

Many people followed her after this incident. Eyes, rumors, and hatred were all around the school. Mr. Tanaka goes to Mitaka and tells her that her death is the only way they can all be happy. This chapter ended with Mikata facing the Demon of Justice and determined to fight it.

Chainsaw Man Chapter 99: What will happen next?

The birth of a villain has been wonderfully shown in the latest chapter of Chainsaw Man. Asa Mikata, although just an ordinary student, has the strength and intelligence to face any horrors in life. The lesson from Takana-sensei managed to tame her emotions in a short time. But she’s quick enough to make judgments about what’s going on around her. And now, this chapter will continue the story of Chainsaw man. Denji is currently unaware of the potential threat in the rest of the world. So news of a student defeating the Devil of Justice will surely come to his years. Hearing of a new threat, Denji will pack up his things and fasten his seat belt to face any danger coming his way in the near future. Chainsaw Man Chapter 99.

The weekly publication of Chainsaw Man Manga has begun. So fans don’t have to worry about the series getting any further hiatus in the future. Chainsaw Man Chapter 99 has now been sorted with a proper release date for next week. Chap will be released on July 20, 2022. All chapters of the manga will only be found on the official Viz Media pages. Therefore, keep in touch with The Anime Daily to receive all the same updates.