Josh Murray started his career when his family moved to an old pine plantation in the Kerrie Valley, about 70km northwest of Melbourne, Australia, in 2008.

The whole family was surprised to discover that the previous owner had left behind 40 hens. Josh was 9 years old then, he wanted to earn pocket money and made a deal with his parents that he would take care of the chickens and collect money from selling eggs. 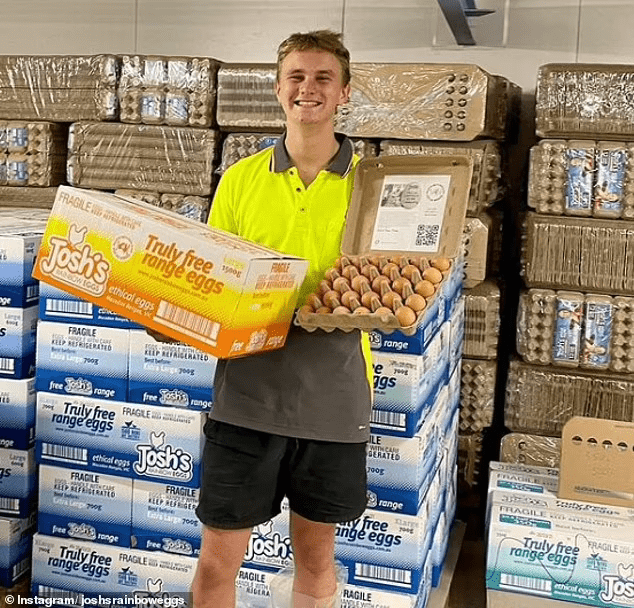 This is also the time when Josh’s own company, Josh’s Rainbow Eggs, was born.

However, Josh quickly found he had too many eggs and not enough customers, so he proactively approached local stores and farmers markets to showcase his products.

The whole family helps Josh run Josh’s Rainbow Eggs. By 2012, they had to hire more outside workers to help harvest eggs from 1,500 chickens. Josh then purchased a 62.5-hectare flatter farm, just five minutes from their home in the Kerrie Valley, to give the hens more room to roam.

“It is very different from the hills and forests where we live. It’s easier to raise chickens here because they have a lot of space to eat,” Josh said of the reason for buying a new farm.

In 2015, Josh, then 13 years old, decided to grow his business further and wrote a heartfelt letter to Coles (a large supermarket chain in Australia) explaining why they should accept his product.

Less than a day later, Josh received a reply. Coles invited him and his mother to meet executives in Melbourne.

However, Coles and Foodworks are not Josh’s only customers. He continued to approach Woolworths – another Australian supermarket chain and succeeded.

Josh before and now

In 2021, Josh’s Rainbow Eggs were sold in more than 100 stores across Victoria and generated $5 million in annual sales.

“Tens of thousands of people eat our eggs every week. That’s a lot,” Murray said proudly.

In 2019, Josh was awarded the Victorian Young Achievement Award for Environmental Sustainability.