After Elon Musk announced that he “turned the car” not to buy Twitter anymore, this company was also adamant that it would be ready to use the law if the Tesla CEO “dropped the deposit”.

This is not the first time brands have been sued for dropping deposits. Before that, just in 2020, fashion brand LVMH was sued by Tiffany brand for dropping a deposit. After that, both sides reached an agreement, reducing the selling price from 16.2 billion USD to 15.8 billion USD of finished goods. This situation is said to be repeated if Elon Musk demands a “deposit” for Twitter.

In early 2022, Tesla CEO surprised netizens when he announced that he would buy back all of the shares and acquire Twitter after many times this billionaire was blocked by this social network because of his statements. However, recently, CNBC reported that a letter from the legal team representing billionaire Elon Musk to Twitter revealed that Elon Musk wanted to cancel this $ 44 billion deal. On the Twitter side, the company is still determined to complete the contract at the offered price, and they said they are ready to seek legal help if Musk “puts down”. “We’re confident we’ll win in court,” Twitter president Bret Taylor said. On Elon Musk’s side, the billionaire’s lawyer said he wanted to cancel this deal because the company violated many terms of the merger agreement. The company’s shares also fell as much as 6% immediately after this news was announced. 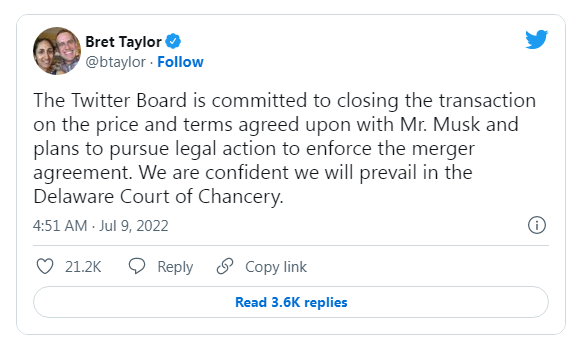 Twitter’s president posted on his personal page that he is confident that he will win if the lawsuit happens (Image: Internet)

As for the reason Elon Musk “turned the car”, according to CNBC, it was because Elon Musk’s side recently could not verify the data on virtual accounts from Twitter, which made his team feel suspicious. Twitter said that fake accounts account for less than 5% of daily users, but can not provide evidence that makes Elon Musk feel unconvinced.

However, some experts say that’s not why Elon Musk wants to drop the deposit. Specifically, Twitter’s share price has plummeted since the news that Musk wanted to buy Twitter in April. Experts say this is the reason why the Tesla founder wants to change his mind or renegotiate the price of the deal. They think this is the billionaire’s “trick” for Twitter to reduce the price for him.

According to documents from the US Securities and Exchange Commission (SEC), if this deal is unsecured, Elon Musk will have to pay $ 1 billion. However, if Twitter files a lawsuit, the number will increase even more and both sides will take longer to settle.