I don’t know if this is an “omen” of the young couple’s turbulent marriage later on.

Everyone wants to have a romantic wedding with their partner, because that is the most precious moment in everyone’s life.

However, there are many funny stories that no one can predict. For example, the couple Riley and Dillon Murphy encountered an unforgettable situation during their wedding, held in Kailua-Kona, Hawaiian island over the weekend.

According to the wedding video, everyone in the ceremony is very happy, the atmosphere is extremely vibrant, bustling on the Hawaiian coast.

Suddenly, a big wave came, crossed the embankment to the wedding venue.

Too surprised and panicked, many guests ran away as soon as the wave hit. Others were slower to run and were beaten by the waves to get wet like mice. It is predicted that this large wave “accidentally” is the result of tropical storm Darby. It swept through Hawaii this past weekend, causing widespread heavy rains accompanied by high waves and devastating effects for weddings like this one.

In an interview with the local newspaper, the bride and groom at this unlucky wedding shared that they had heard the weather forecast and knew this storm well but did not expect it to come so soon. Although the wedding was interrupted midway, the groom was still lucky because the huge wedding cake was still intact, and luckily, no guests were injured.

The couple also joked that the storm seemed to be a reminder to them of life ahead. In a marriage, there are always unpredictable “storms” that come and go, the important thing is how each person deals with it.

Groom Dillon shared his thoughts on the incomplete wedding: “Despite the unfortunate incident, fortunately, I was able to take the best photos with my wife, and that night we also celebrated Organized another party to make up for the wedding in the morning, everyone was dancing happily.” 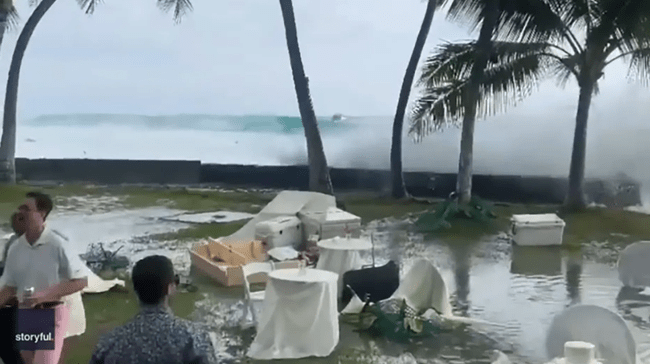 “The most important thing is that on our happy day, all family, friends and loved ones are here. The wedding has become more special and meaningful because of that,” the couple shared an optimistic message in an interview with a local radio station.

According to meteorologist Jane Minar, Hurricane Darby produced waves that could be as high as 6m along the southern coast of the island of Hawaii. Several buildings were damaged by the waves and several roads were forced to close over the weekend.

See also: The woman who wakes up after 2 years of coma solves a thrilling case like Conan