The current chapter is truly a culmination of all that Oda sensei has achieved in the past 2 decades. 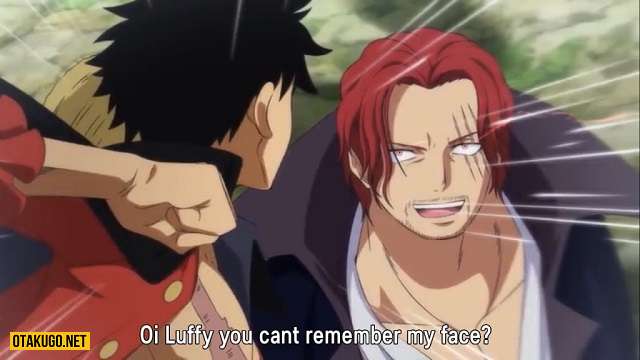 Did you know that it’s been 25 years since the release of One Piece in Weekly Shonen Jump? Right! On July 19, 1997, the series debuted for the first time.

And now, we have started the race to the end.

The latest chapter has brought a lot of new things and has made the fandom crazy. One of the best news is that Sabo is still going strong; in fact, he is doing very well.

We hope that One Piece 1055 gives us a glimpse of what he plans to do next.

Literally, the manga begins with Luffy and Shanks. The iconic moment when Shanks saves Luffy, he then passes on his signature Straw Hat to the boy.

It was a promise between the two men – one day, when Luffy became a great pirate, he would return the hat to Shanks.

Needless to say, Luffy is now a great pirate. He is the infamous Mugiwara no Luffy, the newest Emperor of the Sea. He is actually someone with the same title as Shanks himself.

Maybe it’s finally time for him to return the Stranger?

We see that Shanks’ crew i.e. the Red Hair Pirates are very willing to meet Luffy. It was hard for them to believe that the newest Yonko had chatted with this group in a bar.

After all, the Red Hair Pirates and Luffy originally had a special relationship.

However, from the look of it, Shanks had no intention of meeting the child right now. He still wants to wait. Shanks knew that their fateful meeting was drawing near but it was probably only a short while. Therefore, he chose to wait and focus elsewhere.

Race to One Piece

We have to remember that Shanks was never in One Piece. Buggy gets sick, and Shanks stays to take care of him. So it’s time for Shanks to go to Laugh Tale and get One Piece for himself. He waited long enough.

We see in this chapter, sitting next to Ben Beckman, Shanks chooses to join the race for One Piece.

We know that aside from him and Luffy, the biggest opponent to this is Blackbeard himself and we all know he’s extremely dangerous.

One Piece Chap 1055 will probably choose to have Shanks go away to deal with Barto and then take the steps to get the One Piece.

The question is, does he have to get the Poneglyphs or has he known about its location since Roger went there in the past? We will find out.

The next chapter of the One Piece manga will be published soon because there is no time off this week. So follow Recent Highlights for all the latest news.